The SMSM horrified at its favourite toys demise, has given oxygen to the deluded Bears at Club 1872.

It seems that fresh from destroying thousands of Pounds worth of property in the Parkhead toilets, that the narrative should switch to the most dastardly and evil group of people who ever banded together: The Green Brigade.

The Hitler Youth have nothing on the Green Brigade as reputations go, they were just a pack of lads who look like Prince George.

The Green Brigade by contrast had the temerity to wear a tifo, sing for 90 minutes and jump around in their safe standing area.

I mean how dare they and not even one rendition of God Save The Queen.

They howled in the Record:

“Club 1872 has today written to the Rangers board requesting that they ban Celtic supporters from Ibrox until Celtic can prove they have taken substantive action against the Green Brigade and other overtly sectarian elements within their support.

What sectarianism are they talking about?

The wording of the display was offensive, but it wasn’t sectarian.

I personally agree with Scottish law which doesn’t classify the term ‘Hun’as sectarian.

It explains their behaviour and their appearance. John Guidetti sang the Huns are Died song and couldn’t be fined as it was not a sectarian offense.

So i personally don’t see calling them Huns as sectarian.

Scum is self evident. There isn’t a court in the land that would disagree.

It is the hanging effigies and the alleged banner saying KAH or Kill all Huns which are the issues.

The Record however but cannot provide pictures of the KAH banner or the alleged pro IRA banners it reported. 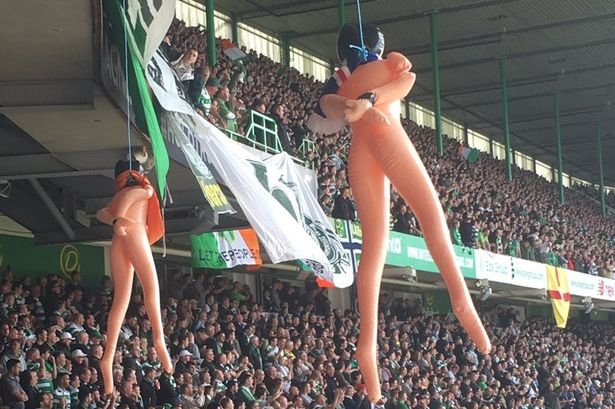 The hanging effigies was really poor form and it cannot be condoned. However it was not in the Green Brigades section. Blaming them is jumping to assumptions.

This entire display is 2 sex dolls and 2 Sevco scarves. Hardly typical of the Green Brigade who wore a Tricolour throughout the game in perfect order.

When they sang the symphony it tailed off well before “Ooh ahh up the ‘Ra”and all in all i think they should be commended firstly for their behaviour and of course for the amazing colour and noise that brought the Thunder back to Paradise.

There was nothing wrong with the Green Brigades display.

The Huns are scum and need told where their place is.

For too long we have been hearing about how our achievements do not count because the Oldco died and Sevco started from scratch.

We have been listening to the moans when Wallace wasn’t picked for Scotland and hear them rage that Tierney was in the team.

As if it were a conspiracy.

We heard how Halliday was worth 15 million quid and told that Waghorn’s Championship penalties were better than Griffiths Premiership goals.

We have listened to the Magic Hat analogies and fair enough, Deila wasn’t the best, but the Orcs need told that this is a new Celtic.

We are bigger, richer, stronger and our history is intact.

We are constantly bombarded with the continuity lie by a willing press, with the ignorant hordes just waiting to start a petition or demand having something reworded for fear of offending Them.

After all the guff out of Govan, it is good to finally have a forum where we can prove our superiority to them: Football.

Joey Barton can fill a newspaper with as much garbage as he wants, but he has to back it up on the pitch if he wants to be credible.

The Rangers are the same. They talk of wold records, award themselves 5 stars for their first birthday and demand we all play along.

Well good on the Green Brigade for saying what the rest of us are thinking.

Get back under your rock Sevco!

The 4 your old knuckle draggers have a mouth like Barton but cant back up their howls.

If the wee cubs at Club 1872 want Celtic banned then that’s fine by me.

Just pick up the bill for the mess you have made and mind that you never come back again.

We don’t need their money and our players should be able to beat that rabble wherever they play.

Less chance of Asbestos poisoning too.