Celtic is a political club founded for political ends by a member of the most political religion on the planet.

To translate that, Celtic was founded to raise money for societies underprivileged due to the political situation the diaspora found themselves in, one of sub-humanity.

No jobs, no housing, no food, no outlook on life for people themselves the children of refugees starved to death by the political epoch known as the Victorian era.

Our clubs founder who rallied people against the political era, Brother Walfrid was himself not just a Catholic, but a member of the Marist Brothers. 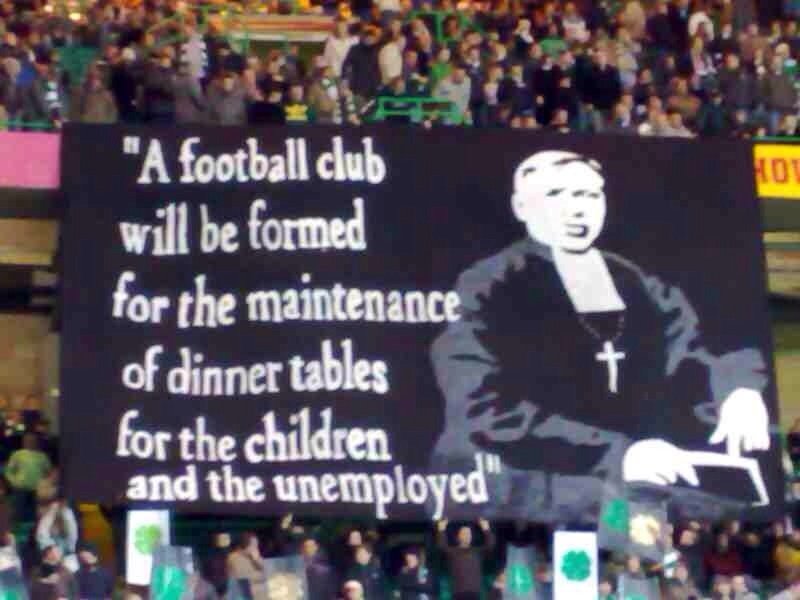 Our club was founded to deal with the political situation the diaspora found themselves in.

The Roman Catholic church for all its complexities is the most politicised version of religion the planet has ever seen.

From the Holy Roman Empire to the Crusades, to the Inquisition, to the foundation of the Vatican as an independent nation state, the Church has always been half way between a Government and a Business.

Those 2 examples are politics personified, how peoples lives are run and how wealth is distributed.

To complain that the Green Brigade are overtly political is to overlook the clubs origins and that of its supporter base.

Those who would like to see Celtic become a Scottish version of Liverpool FC, whereby the club has a massive Catholic following who don’t know the words to a rebel song just isn’t going to happen.

For starters, the entity across town squeal their hate at all and sundry every time they enter a ground.

Where is the phone in hotlines, appeals to UEFA and imminent stadium closures every time they sing from the banned song book of old?

You can hear them clear as day, recently the “Famine Song, Billy Boys, We hate Catholics, Follow Follow etc” have been joined by “This is how it feels to be Rangers and No one likes us”

The first song says “The Lisbon Lions won’t see 10 in a row” with their clueless support plagiarizing our own chant and adding a disgusting message to it.

Bathing in beer before being horsed out of Europe. Scotland’s Shame mock the Lisbon Lions.

No Progres for Sevco. They call us Fenian bastards and threaten to chase us everywhere but that doesn’t upset any Scottish scribes, nor Hugh Dallas’ UEFA.

They call us obsessed, they call our support sectarian, they are able to spout their bile with impunity, mocking the elderly, threatening to attack the young.

Whilst this is allowed to happen with impunity, the moral compass of the Green Brigade will not be altered, nor should it.